Music Classes During the Pandemic 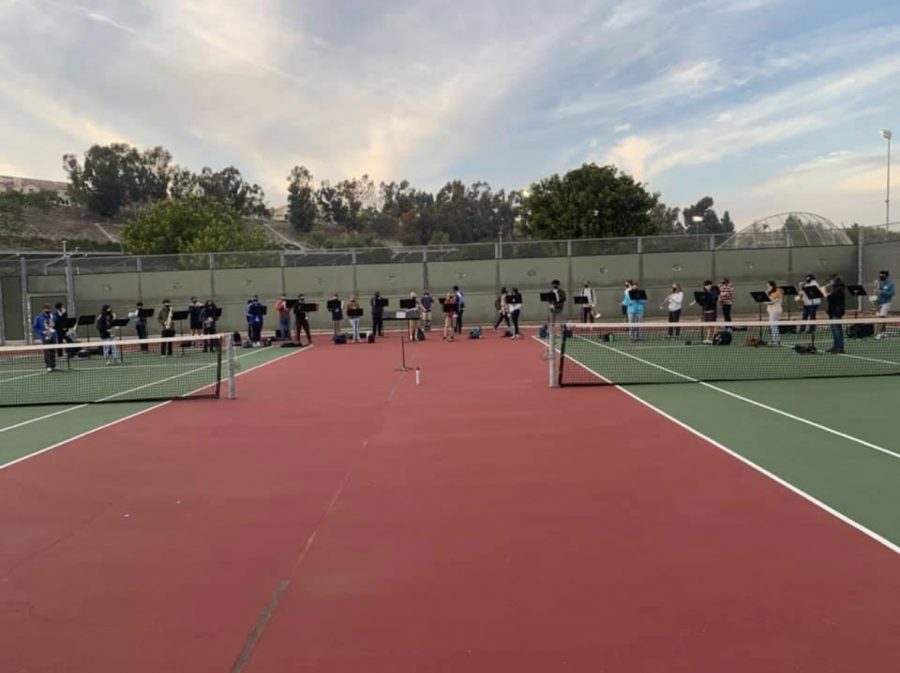 Online orchestra students have received PDF sheet music, so they can play along with the hybrid students. The orchestra curriculum now have extra online lessons and educational orchestra videos to help students stay engaged with the class.

“We have no concerts at this time scheduled, but hope by the end of the year to have individual small concerts for each class (no combining of classes) either outside or in the large gym with greatly reduced attendance,” The director of orchestra, Mr. Jeung, said.

Safina Khan (10) explained how orchestra online couldn’t compare to in-person, since the main focus during an orchestral piece is to always listen across the group and work together while playing.

“But thanks to Mr. Jeung, who has been taking every opportunity to make orchestra fulfilling for everyone this year, everyone is working on their individual technique. So we might sound even better than before when we come together again,” Safina stated.

The band program was heavily affected by the pandemic as explained by Mr. Weinberg, the band director. All performances and practices for band classes, drumline, and color guard were canceled as everything was moved to online.

For the first semester of the school year, band classes used a program called Music First.

“Each student had playing assignments with scales, etudes, and solos. Other assignments included music history and some theory. We had no ensemble playing. Each student was responsible for their own work,” Mr. Weinberg explained.

For the second semester, the district approved band programs to play in person. Band students are able to practice during their class with the new addition of special performance masks and bell covers. The students practice outside due to the airflow of the instruments. They are currently practicing band warm-ups and music for a virtual concert they will hold in March.

Marching band students and the Battery (Drumline) have begun their practice two days per week, after school. They have a specific rehearsal procedure the students must follow, as well as a specific distance to practice together. Front Ensemble currently meets online with the percussion staff.

Mr. Weinberg hopes to have a pep band ready to play at Home football games when and if that takes place.

“We have done the best we can to provide music, percussion, and color guard classes for my students. It is much different than we were able to run in the past. However, this semester we finally felt a little bit like our old band program. Even if some students attend and others stay online.” Mr. Weinberg said.

Mr. Harney, the director of choir and guitar classes, has found the positive and negative aspects of teaching his classes during the pandemic.

The choir students are practicing in the school pit with masks on, maintaining social distancing. Online students would sing along in their home, while Mr. Harney played his keyboard for the class.

The choir class also uses online materials. Mr. Harney would produce tracks so the students could hear their part of the section. They would split into breakout groups to sing with their section. The class have also been doing more music history and theory assignments for grading, since it is hard for Mr. Harney to grade students singing over zoom.

“Is it possible to choir in a zoom setting? By definition, our class has to have many people making sounds simultaneously, and everyone has to be able to hear everyone else sound simultaneously and that’s impossible,” Mr. Harney said.

Unlike orchestra or band, it is more difficult to do a widespread concert, since voices are harder to hear when spread apart. So, the choir is planning for a virtual choir in the spring, where individual recordings will be edited together to be shown as a whole.

Mr. Harney has not faced much difficulty teaching guitar classes in an online format because it is not an ensemble activity like a choir. While online students play at home, hybrid students would go outside in small groups or individually to practice.

“I think guitar class might be actually going better because I do use a lot more online resources now which has been good. I think it’s going a little better honestly with the compulsory technology involved. I would have not expected that, but it has been going good,” he stated.

His biggest concern as a music director is the human interaction, artistry, and process that goes through creating music has been harmed the most.

“The reason why people sing in a choir is not to produce some kind of product or song. It’s the process and the humanity involved in making the music,” said Mr. Harney. “It’s the process of making that come together. And the human experience, interaction, relationship, and developing that process is what makes the class valuable. And that has continued in the pandemic, but it is much more challenging.”