The Growling Wolverine • May 4, 2022 • https://thegrowlingwolverine.org/2323/features/eco-freakos-cleaning-campus/ 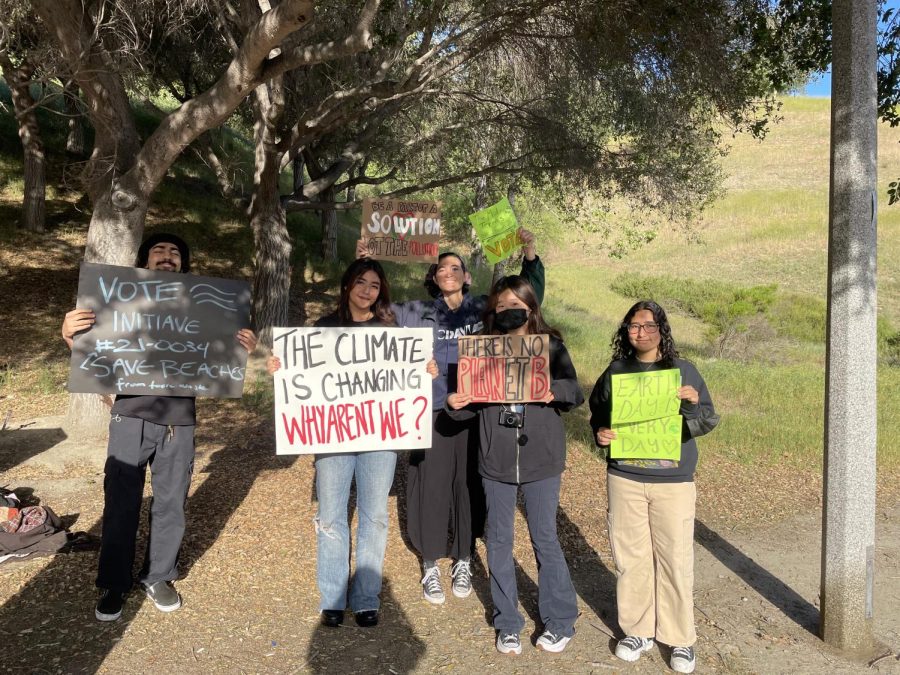 On Saturday, March 5, 2022, the Eco Freako Club cleaned up behind the Tennis courts of Aliso Niguel High School. The clean-up resulted in 361 tennis balls being found that had been left behind by the tennis players, and tennis coaches.

Laura Richards (10) was a part of the clean-up crew. She explained that “We [The Eco Freakos clean-up crew] cleaned up the trail behind the school picking up any trash that we saw. We went behind the bleachers and picked up a lot of food bags…the tennis balls were found behind the tennis courts and part of the blacktop.”

The entire clean-up spanned from Foxburrow park to the portables located on school grounds. She worked with Alyssa Draper, another member of the club, to clean up the tennis balls and other trash, especially behind the bleachers.

Laura believes that many of the tennis balls were thrown over the fences on purpose since the responsible party “[found] it fun and aren’t having to pay for new ones.”

In regards to keeping the surrounding area clean, Laura explained that the Eco Freakos “like to clean up at least once a month and previously [they] have done them [clean-ups] every 2 weeks.”

Laura stated that The Eco Freakos kept most of the retrieved tennis balls and “are making art out of the tennis balls and planning on displaying it around school…in order for people to hopefully see the damage that they cause.”

Alyssa Draper (10) assisted in the clean-up as well. She explained that the area they targeted to clean “took [their] group of about 10 or so people 2 hours to clean up, and there was still trash left over. It felt like a never-ending job, especially when [they] got closer to where the tennis balls were.”

She believes that more people are needed in order to make a more substantial impact. She described the trash to include “a lot of empty snack bags, a shredded trash can, a tennis racket, plastic bags, bits of microplastic, etc.”

After the clean-up, the cans and bottles were properly disposed of and recycled.

“We spoke with a parent playing on the tennis courts who agreed that Physical Education tennis is likely accountable for the amount of tennis balls found on the trail, as they’re simply more inexperienced and aren’t held as responsible,” stated Alyssa.

Unfortunately, Alyssa detailed, “A lot of dead and spiky plants covered the tennis balls, so we weren’t able to get to all of them. The tennis balls went past the trail into the creek.” However, on April 4 and April 5, the Eco Freako Club held an upcycling event for the 361 tennis balls they retrieved.
Since the Eco Freakos are aware that the tennis balls are a serious issue to the surrounding environment, they appointed Yaz Kalaycioglyu (11) as the Head of Tennis Affairs.

Yaz clarified that “ [t]ennis balls are made out of rubber so they don’t decompose, they just erode over time.” She also stated that “players tend to hit tennis balls over once the ball gets flat or too old. It’s a common thing to do. Additionally, it’s known that a lot of students in PE/recreational tennis will purposefully hit the ball over the fence.”

In order to tackle the problem, Yaz has spoken to the Tennis coach and received permission to “make posters/garlands [to raise] awareness about the issue and [remind] students to not hit the balls over the fence.”

Additionally, they got permission to “…implement a donation box for old tennis balls that [they] will pick and send out for recycling. There’s a company that specifically recycles tennis balls, so [they] plan to reach out to them and send the old balls there.”

Yaz plans to continue to try to prevent players from irresponsibility and discarding their tennis balls. Additionally, Yaz is a co-captain of the tennis team so she “will be able to instruct varsity players to not hit the balls.”